RAGS TO BILLIONAIRE STATUS – HOW LIKELY HOW FAST

Now this means that unless you happen to fall into a rather sizable inheritance, all other things being equal you have a 0.00001549295% chance of becoming a billionaire. If you live in the U.S. your odds are 0.00014733333%, which is actually an order of magnitude better (now we’re getting somewhere).

Can never say never though …

Robert J. Pera, founder of Ubiquiti Networks and owner of the Memphis Grizzlies became a Billionaire in 6 years.  At 34 he was listed on the Forbes 10 youngest billionaire’s in the world. He has a B.S. in electrical engineering from UCSD and went to work for Apple.  He left Apple and with accumulated $30,000 in savings and credit cards to start his company Ubiquiti networks. He says ‘success is a matter of identifying opportunities and putting in clear and concise efforts in the right direction’.

Jay Walker set a DiMaggian record by attaining a $1 billion net worth (liquid or illiquid assets) within one year of founding Priceline. He had broken a mark set a year earlier by Global Crossing’s Gary Winnick.

Here’s a chart that sums it up all very distinctly … 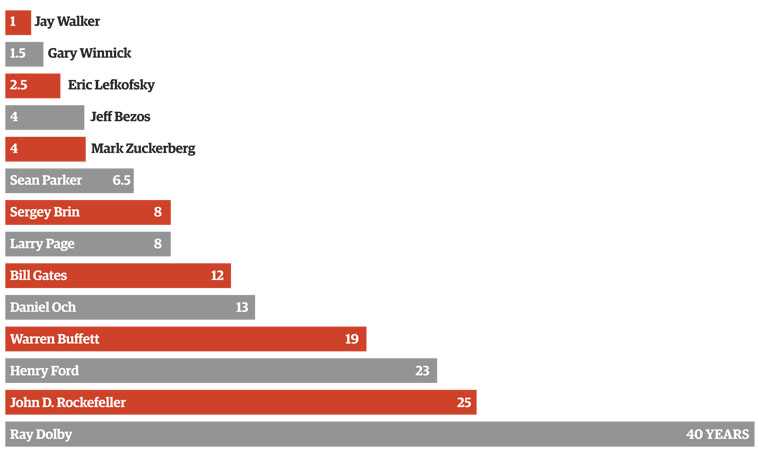 With technology accelerating there has even been discussion of start-ups selling for a billion dollars within a month from their conception as soon as the year 2015.

It is a fact that strategizing to become a billionaire is asinine. If it weren’t, there would be a lot more billionaires.

Becoming a billionaire is a positive externality of having an amazing idea, exceptionally rare work ethic, excellent vision, and, to some extent, outstanding luck.

The time you spend wondering about how to become a billionaire will get you no closer to your goal…. It’s all about real action.

Now that you’ve read this and see the possibilities, share your thoughts.

Smart v/s Dumb Money – How do you differentiate

GETTING STARTED IN REAL ESTATE DEVELOPMENT